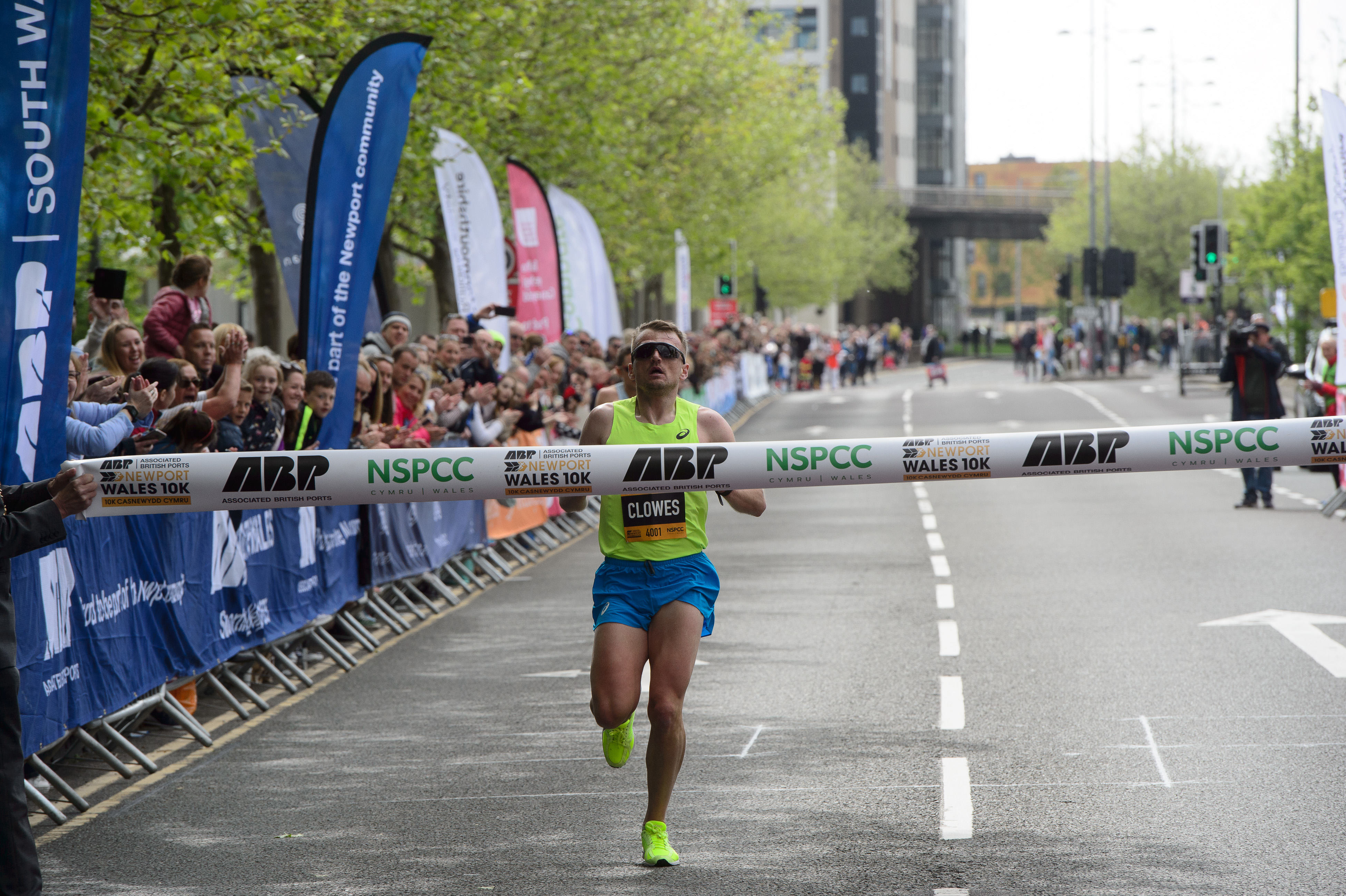 Chris Bird flew to victory in the ABP Newport Wales Marathon as he smashed the course record.

“I was three seconds outside my PB in the Brighton Marathon three weeks ago and I wish I had waited for the Newport race to try to break it,” said the 36-year-old Bird.

“When I ran in Brighton I went off at 2:26.00 pace, but I had a bit of a cold and I suffered as a result. I was hoping to go even faster here, but I felt a little bit tired,” said Bird.

“Adam Holland went off hard, but I finished hard. I hit the front at around 21 miles and, even though I was tying up a bit in the end, I was able to stay clear of the rest.”

Holland held a 300 metre lead at half-way as he went through 13 miles in 74 min, 30 sec. As the race wore on, fatigue set in and he slipped to fourth place overall.

“I paced someone in the London Marathon last weekend and finished in 2:57.00 and a few weeks ago I ran from John O’Groats to Land’s End. That was 876 miles in 17 days and I felt a bit of that in my legs,” said Holland.

“When I got to 15 miles I could feel that it just wasn’t there. Now I’ve got to get home and be ready to pace someone in the Milton Keynes Marathon on Monday.”

Newport has a new local hero after Carla Swithenbank won on her own doorstep as she moved up from third last year to triumph in the women’s race.

The 28-year-old former Police woman led from gun to tape as she knocked 24 seconds off her previous best time as she made it a double for the Mickey Morris Racing Club as she followed in the footsteps of the inaugural champions, Natasha Cockram.

“I’m bouncing after that,” admitted Swithenbank. “I’m so proud to have won my local marathon and when I woke up on the morning of the race and said to myself nobody is going to beat me today.

“I’m from Newport, I live in Newport and I wanted to win this more than anything. It’s great to have gone from third last year to winning it this time.

“Last year’s race was my marathon debut and I nearly didn’t bother entering. But then I thought, this is in my home town, so I had to give it a go.”

Swithenbank has gone from strength to strength since debuting over the 26 mile, 385 yard distance a year ago. She won the European Police women’s title in Dublin in 2018 in 2:46.13 and is getting faster and faster.

A former Wales international footballer, she quit Cardiff City Ladies when she was 21 and has since been concentrating on running. Married to a soldier, Nick, for the past four years, she now works in customer services at Welsh Water in St Mellons.

Her winning time this weekend was 5 mins, 47 sec quicker than she ran last year and she had a 12 min, 19 sec winning gap over Swansea Harrier Alaw Beynon-Thomas, who came home in 2:58.07 on her marathon debut.

Matt Clowes got back to doing what he does best by racing to victory in the ABP Newport Wales 10K.

The English international had been struggling with a hamstring injury since pulling out of the Brecon Carreg Cardiff Bay Run at the end of March and headed to Newport to assess his fitness.

“The first 5k was slower than the second, but I’m happy with the result. I’m a racer and that’s what I do best, so winning was nice,” said Clowes.

“I knew I wasn’t going to be able to run a personal best time. My hamstring went at 9K in the Cardiff Bay race and this was my first chance to test it out after my rehab.

“I could feel it a little bit coming back, but it was OK in the end. I’m going to have a little run around in the Whitchurch 5K tonight and then I’ll be running in some more local races this summer as I build up to the Berlin Marathon.

Clowes came home in 29 min, 43 sec (his PB is 29:19) to hold off Bideford’s Shaun Antell as the top two athletes cracked to 30 minute barrier. His winning time equalled the record set in last year’s inaugural race by his Cardiff AAC clubmate, and Commonwealth Games and World Championship athlete, Ieuan Thomas.

But whereas Thomas won by 70 seconds in 2018, Clowes had to work hard to hold off Antell, who came home a mere three seconds behind him. The top two were locked together as they went through 5K in 15:08 before Clowes turned up the heat in the second half.

Antell came into the race in fine form having clocked a personal best time of 29:13 in finishing 10th in the Brighton 10K last month. Third place went to Swansea Harrier Dan Rothwell, who followed up his 10K debut time of 31:02 in Cardiff Bay with a much improved 30:38 as he held off 2018 Commonwealth Games track star, Tom Marshall.

The women’s race had a new champion as Bristol & West AC’s Charlotte Taylor-Green proved her switch from track to road looks to be a good one. A week after acting as a pacemaker in the London Marathon she held off the 2018 winner, Rachel Fenton, to win in a course record 34:44.

“That was only two seconds outside my personal best, which isn’t bad after running to half-way in London last week,” said Taylor-Green.

“Because I’d run in London last week I wasn’t sure how my legs were going to feel so I just wanted to come out and enjoy myself today. I felt pretty good and, having run my 10K PB in Brighton three weeks ago, I’m starting to become consistent on the roads.

“My coach, James Thie, suggested the switch from 800 and 1500 metres to the roads this year and it is all very new at the moment.”

However new it is for Taylor-Green, road racing is part of British international Fenton’s DNA. Having graduated into the veteran ranks since last year she also came to enjoy herself and ran a second inside her winning time in 2018.

She finished in 35:02, but was 18 seconds down on Taylor-Green. Third place went to Cardiff AAC’s Lucy Marland, who finished in 36:34.