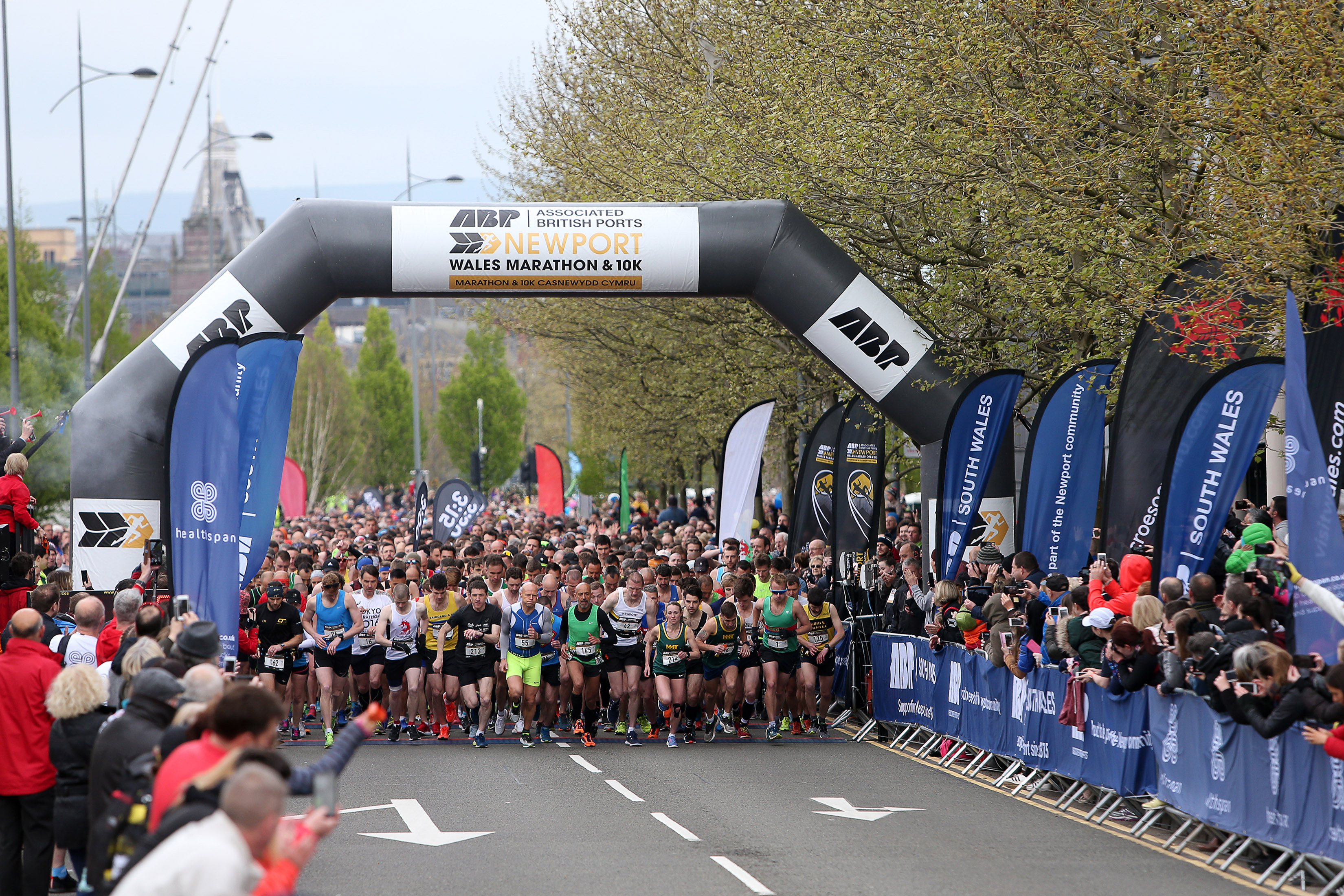 A new era of distance running in Wales is underway after the inaugural ABP Newport Wales Marathon & 10K proved a triumph for participants, spectators and the city.

The nation’s new premier marathon was a hit as thousands of runners enjoyed perfect marathon conditions and a fever-pitch atmosphere in the heart of the city centrE before setting off on the flat 26.2-mile course alongside the River Usk. Thousands more took their place in history by running the second leg of the Run 4 Wales 10K series – the ABP Newport Wales 10K – around iconic landmarks including the Newport Transporter Bridge.

Runners were roared on by an army of supporters, who lined the streets of Newport and provided the noise in the picturesque villages of Redwick, Goldcliff and Magor. The first name in the ABP Newport Wales Marathon history books was Neath Harrier James Carpenter, who broke clear with three miles to go to take the title in a time of 2 hours, 33 minutes, 32 seconds.

Natasha Cockram smashed her PB by more than five minutes to take the women’s title in 2:44:58 holding off Emma Stepto and Carla Swithenbank before streams of runners completed the challenge of a lifetime along the bustling riverfront.

First home in the ABP Newport Wales 10K was Ieuan Thomas, who broke the half an hour mark with a 29.43 run just 10 days after returning from the Commonwealth Games on Australia’s Gold Coast. Rachel Felton won the women’s race in 35.04.

Run 4 Wales Chief Executive Matt Newman said: “The inaugural ABP Newport Wales Marathon has been an overwhelming success across all aspects of the day. The look and feel of the city was great, this major event feel is what we envisaged when we sat down to plan the event with the Newport City Council and Welsh Government.

“The runners on the day have voted with their feet and had some truly amazing experiences. The initial feedback is that the courses were great and there were plenty of personal bests, so that is something we will look to build on.

“The event wasn’t without its teething problems but that is because of the pure scale of the event in year one, but it’s been phenomenal.

“The initial support from the council and Welsh Government is for three years, but it’s a bit like the Cardiff Half Marathon which had some support in the first years before becoming a real standout event on the Welsh sporting calendar – I see no reason why the ABP Newport Wales Marathon & 10K can’t do the same.”

The maiden marathon is expected to have pumped around £1.1million into the local economy while showcasing what the city of Newport has to offer the world. The staging of the event would not have been possible without the support of Title Sponsors Associated British Ports, who are delighted to have been able to contribute to an event that will have such a positive impact on the local community.

Strategic Partners Welsh Government and Newport City Council have pledged to back the event – which is expected to grow year on year – until at least 2020.

Minister for Culture, Tourism and Sport, Lord Elis-Thomas, who was at the event to officially start the race, said: “It was a real privilege to be able to start the inaugural ABP Newport Wales Marathon. Congratulations to all those who ran today for their amazing efforts, not only in completing the race but also all their fundraising work.  I’d like to thank the volunteers, organisers, and supporters for making the first ABP Newport Wales Marathon such a memorable occasion.  I’m delighted that the Welsh Government has been able to support this race, showing yet again that Wales is an ideal location for major sporting events.”

Councillor Debbie Wilcox, Leader of Newport City Council, said: “Today has been an amazing day for the city. The support for the event has been incredible – from runners and their family and friends, Newport residents who lined the streets, to all the volunteers.

“The ABP Newport Wales Marathon and 10K is the latest in our growing events programme showcasing our city to the world and we have again proved our worth as a venue for major events. I very much look forward to hosting future events which will help further boost the city’s economy and profile.”

The first ABP Newport Wales Marathon is expected to have raised thousands for charities and good causes, including Lead Charity Partner NSPCC.

Des Mannion, Head of Lead Charity Partner NSPCC Cymru/Wales, said: “We would like to say a massive thank you to everyone who took on the ABP Newport Wales Marathon in aid of the NSPCC and helped raise vital funds for us in our fight for every childhood.

“The NSPCC is honoured to have been chosen as the lead charity partner for the ABP Newport Wales Marathon and every penny raised will make a difference to our work in Wales and support a range of services run by the charity.

“We are delighted that the marathon has been such a great success and hope everyone who took part in the inaugural race enjoyed the day.”

Runners who want to be a part of the action with a whole year of training under their belts can pre-register here.