From boxing for Wales to a marathon on his own doorstep… 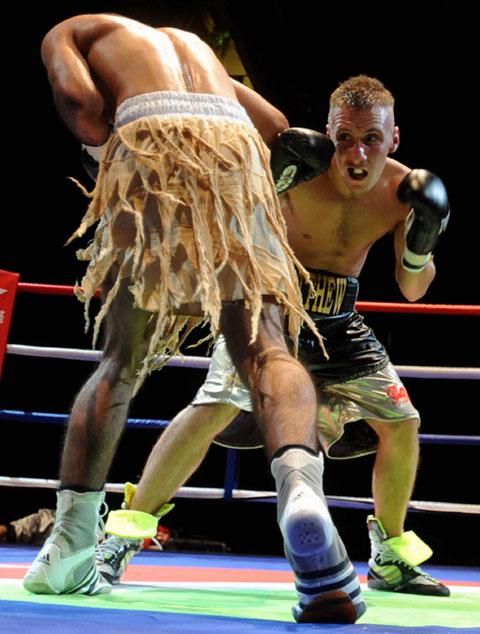 If it comes down to a scrap over the final few miles of the ABP Newport Wales Marathon on Sunday then will be only one winner if Matt Edmonds is still in the mix.

The 34-year-old Mickey Morris Racing Club athlete is the fastest man in the near 6,000 field and will certainly have good local knowledge of the course – he lives on Traston Road, in Lliswerry, and will run past his front door at the 21 mile mark.

But what makes Edmonds one of the stand-out candidates for the first title is his sporting pedigree. As well as boasting a marathon best of 2:33.30 in Dublin last year, he twice represented Wales at the Commonwealth Games in the boxing ring.

He was already a veteran of 80 schoolboy, youth and senior fights before he went to the 2002 Games in Manchester as an 18-year-old. From the baby of the team, who was beaten by the eventual champion Kennedy Kanyata, of Zambia, four years on in Melbourne he went as a realistic medal hope in the 54kg weight category.

He won his first two fights before bowing out to the Mauritious fighter Bruno Julie in the quarter-finals. Julie went on to win the silver medal.

On his return from Melbourne he turned professional and won 11 of his 16 fights, challenging for the Commonwealth and British titles. These days running is his No 1 sport, fitting in his mileage around life as a carpenter and being a father to Kyra-Rose (4) and Oscar (19 months).

“It is going to be a bit strange running past my own front door, but I’ve told my wife to have a cup of tea ready for just in case I have to stop at the 21 mile mark,” said Edmonds.

“I’m really looking forward to the race and I know the course off by heart because these are the roads on which I train day in, day out. I’d love to be in the mix to win the race and if I’m still up there at the end then I’ll fight every step of the way.

“When I finished boxing the dream was always to try to make the Commonwealth Games for a third time in the marathon. Ankle surgery has probably put paid to that, but I’d still love to win a full Welsh vest.

“I loved boxing but, since I finished in the ring, running has taken over as my main sport. I was hoping to have run around 2:28 in Dublin, but ended up with 2:33.30.

“It was still a personal best, but I wanted to go faster. I had a reasonable half-marathon time of 71:32 in Omagh earlier in the month and I’m in pretty good shape to give it a go.”

Edmonds had planned to enter the London Marathon this year, but missed the entry date. That’s when he saw on Facebook an advert for the Newport event.

His Mother and Father cajoled him into entering and now he is ready to show the whole family what he can do at the weekend. Look out anybody who tries getting in his way!

“My Dad used to follow me everywhere when I was boxing, so it would be great for him to see me running and doing well in a big race. It is a massive event for Newport and, hopefully, it will be a major success,” said Edmonds.

“It will be nice for my kids to see me come over the line and if there is a chance of winning the race, then I’ll give it my all. I think the fitness and determination I was able to bring from boxing are the main reasons why I’ve been able to succeed in running.

“Both sports hurt, although in a marathon you can slow down or stop if you are in pain. In the ring, the pace and pain is dictated by your opponent and there is nowhere to hide – I’ve been on my back in both sports.”